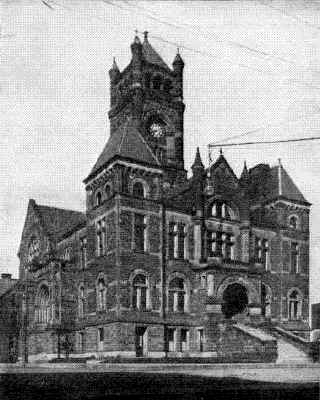 PERRY COUNTY was established in 1817 and was named after Oliver Hazard Perry, a hero of the War of 1812. Perry County occupies a portion of Ohio bounded on the north by Licking and Muskingum counties, on the east by Muskingum and Morgan counties, on the south by Athens and Hocking counties, and on the west by Fairfield County. It is therefore in the eastern and southern part of the State.

The landscape is a varied one. There are no mountains and no plains, but in the southern portion there are many lofty hills and narrow valleys. North of New Lexington the country is rolling, and presents in many places charming vistas.

This section of the county is better adapted to agriculture than the more rugged; hence, well cultivated farms and attractive buildings delight the eye. The highest point above sea level in the county is where the old courthouse in Somerset now stands, which is 1,160 feet. The lowest point is 689 feet, at Monday Creek Station.

Perry County, like its adjacent territory, was the home of the Indian. Far back, beyond the memory of men, and even traditions, a race of people lived here before the red man.  These were the Mound Builders. They left no records, save apparently imperishable memorials  in  the  form of mounds and earthworks. More than one hundred of these may be found in the county, the most wonderful being the “Stone Fort,” at Glenford.

Archaeologists from all over the world have visited this famous spot. It is constructed entirely of stone, and occupies an area of 27 acres. Originally, the walls were 10 feet high. The entire length of the rampart is 6,611 feet. In the exact center within is a stone mound 100 feet in diameter and 12 feet high. Near by is the Wilson Mound, and east of Glenford is the Roberts Mound, 27 feet high and 120 feet in diameter.  South of Glenford is a circle 650 feet in circumference, 31 feet wide and 4 feet high. Within is a well-defined bird with outspread wings.  The bird is 48 feet long. one wing 111 and the other 122 feet wide. In Thorn Township are three circles, twenty-two mounds, one enclosure and one village site.

Many of these mounds have been explored. Human bones, trinkets, implements, earthen- and silverware have been found, but no tablets containing written characters or hieroglyphics—nothing to show who the Mound Builders were, or in what age they lived. If they left other than the monuments noted, these have perished. It is certain, however, that human ingenuity of high order planned, and skilled human hands constructed, these works of earth and stone. To the reader is left the task of determining the solution of the origin of the Mound Builders. They lived in Perry County. They antedated the Indian.

The first white man in Perry County was Christopher Gist. In 1751 he spent a few days on the shores of Buckeye Lake, near Thornport. In 1773, Lewis Wetzel and Simon Girty were visitors in the county, but it was not until 1800 that any permanent white settlements were attempted.

In 1801 George Arnold had entered land in Reading Township, which he afterwards sold to Christian Binckley, great-grand-father of Assistant Secretary of State, Thomas D. Binckley.   By 1802, others began to take up land, among whom was Peter Overmyer. Robert Colborn settled east of Somerset, while George Bowman located on West Rush Creek.

By degrees,  settlements began to appear. The forests were cut away and the log house rose in the clearing.   In those days there were no highways, no railroads, no traction lines, no flour mills, no stores, no telephones, no “New Lexington Herald” to tell of the fat calf and the fine wheat your neighbor raised. These were the good old times about which grandfather still loves to talk, and sigh as he mumbles, “Times ain’t what they was when I was a boy!”

December 26, 1817, is the date given which marks the official organization of Perry County. It is the fifty-second in order, and was created from parts of territory of Washington, Muskingum and Fairfield.  The residence of Thomas Mains Somerset, was used as the first courthouse. Towns began to develop ; the cross-roads store, the water-mill, the blacksmith shop and the church edifice made  buildings enough for a village.

Hanover was platted in 1804, but it never had an official existence.  New Reading, in Reading Township, first called Overmyer Settlement, is the oldest town in the county, and at one time a warm competitor for the county seat.  Somerset was settled in 1804, and was called Middletown.  Thornville became a town in 1811. It is now has a population of 1,200, handsome homes, beautiful streets, fine school buildings, bank, hotel, and two railroads. It enjoys the reputation of being the prettiest village in the county.

Rehoboth was laid out, in 1815, by Eli Gardner, who provided an ample public square, and, when the time came, what is now “The Deserted Village” was a formidable rival for the county seat. Losing the contest for the shire town, its ambitious citizens turned to the culture of tobacco, and, it is said, raised a brand the chewing and smoking of which helped mightily to assuage the grief for the lost court-house.

One of the most influential American journalists and war correspondents, Januarius MacGahan, was born near New Lexington in 1844. MacGahan was considered a hero by the people of Bulgaria where they later gave him the title of “Liberator of Bulgaria”. Every year in June, the Village of New Lexington holds a festival and memorial service in MacGahan’s honor. You will find a statue of MacGahan on North Main Street and if you drive to Maplewood Cemetery, whose entrance is located on Swigart Street, you will see MacGahan’s final resting place. As you head South on Main Street from the statue, you will also notice a one-way street named after Januarius MacGahan, which runs alongside the New Lexington Fire Department on the East side and PNC Bank on the West side.